(Editor’s note: The following is by Gary Wederspahn, FEN board member and author of Intercultural Services: A Worldwide Guide and Sourcebook and many articles on cross-cultural communications and relations. Gary served as Peace Corps Director in Guatemala, Costa Rica and Ecuador. He has lived and travelled in over 20 countries. This article was originally published by Death with Dignity National Center. 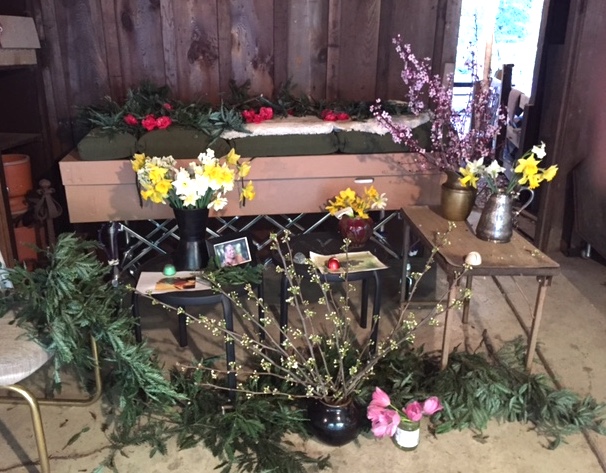 When I was born in 1940, nearly all people in the U.S. died at home. Dying—like being born—was generally a family, community, and religious event, not a medical one. Because people were directly and personally involved in caring for dying relatives, death was considered a natural thing and not a forbidden subject.

Three decades later, Elisabeth Kübler-Ross, in her landmark book, On Death and Dying, warned that we had become a “society in which death is viewed as a taboo, discussion of it regarded as morbid and children are excluded with the presumption and pretext that it would be ‘too much’ for them. We use euphemisms and we make the dead look as if they are asleep.”

I spent most of the 1960s and 70s living and working abroad in countries where the cultural attitudes remained traditionally accepting of death and dying. As a professional intercultural consultant, I was keenly interested in the local end-of-life customs and especially in the inner meaning people experienced around death. So I listened closely to their explanations and beliefs about mortality and frequently was deeply impressed by their wisdom and compassion. Their stories helped me see healthy alternatives to the death denial and avoidance that had become common in my own country.

For example, in the mountains of Luzon Island in the Philippines, an elderly indigenous Bontoc tribesman asked if I’d like to meet his grandfather. Fascinated, I agreed to buy a chicken (Grandpa’s favorite) as he requested for us to share in his thatched hut. As we sat by the fire with the whole family, he brought Grandfather down from the rafters to take his place of honor. His skull and bones were wrapped in beautiful hand-woven fabric. The bundle was opened and we began the meal.

When I observed that Grandfather didn’t seem to be eating anything, my host said with a twinkle in his eye “Grandfather eats the spiritual part of the chicken and we get the rest.” Everyone knew that he was dead. But he was honored and “present” nevertheless. The bonds of family love and connections were considered so strong that Grandfather couldn’t break them by merely dying. There was no sense of this experience being macabre or morbid. It was happy, cordial and fun.

In Guatemala and Mexico, I participated in many Day of the Dead celebrations. The preparation of the food and drink, decoration of the gravesite and creation of the elaborate ofrenda shrine to the deceased person involves the entire family. There is often music and laughter. Children are included. No one denies the reality and inevitability of death. It is accepted as normal and an occasion for celebration of life. Once I noticed an eight-year old boy with a candy skull with his name on it. He giggled and said “I’m eating death!” The cultural meaning seemed clear: There is no need for exaggerated fear or denial.

But Asunción Álvarez, Bioethics Professor at the Universidad Nacional Autónoma de México cautions: “We Mexicans are supposed to have a good relationship with death so that we can think and talk about it and prepare to face it when the time comes. This is not entirely true; only those communities that preserve ancestral customs do so.” She agrees with Kübler-Ross, who wrote “such ‘old fashioned’ customs, I think, are an indication of our acceptance of a fatal outcome, and they help the dying patient as well as his family accept the loss of a loved one.”

To help immigrants understand Americans’ attitudes toward mortality, the Life in the USA guide explains:

Americans do not speak very openly or in much detail about death. Rather they allude to it, avoiding tackling the subject directly, as they would talk about sexual matters. Americans do not die. They “pass away,” “expire,” “kick the bucket,” “go to their reward,” “breathe their last,” “cash in their chips,” “meet their maker,” “depart this life,” “give up the ghost,” or other avoidances. Insurance companies advertise plans designed to meet “your final expenses.” Once death arrives, its victims are not “dead.” Instead, they are “loved ones,” “the departed,” “the deceased,” the “late so and so.” Rather than being buried, the dead are “laid to rest” or “sent to their reward.” Those about to die are “terminally ill.”

I believe the way forward for us is a back-to-the-future kind of effort. By reviving the traditional wisdom we once had and by learning from cultures that have preserved it, our conversations about death can be much more honest, candid and healthy. The educational work of Death with Dignity National Center, The Conversation Project, Final Exit Network, and Compassion and Choices is making progress. But much remains to be done.

The 2019 AARP End-of-Life Survey reported that four in ten respondents say the topic of death and dying is not discussed enough in our communities.

As the COVID-19 pandemic continues to touch every corner of the globe, many people are contemplating their mortality, and death and dying more generally, with new urgency. From news stories to family conversations, the dialogue about end-of-life issues in the U.S. has become both more visible and more commonplace. The U.S. has much to learn from other cultures about how to honor the dead and accept death as a part of life. We can only hope this openness to exploring death and dying continues in a post-pandemic world.