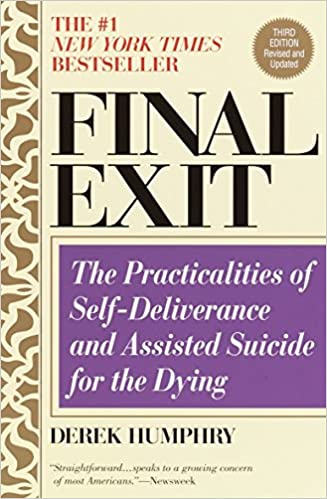 Many thanks to Kevin Bradley of Final Exit Network
for contributing this article.

There is nothing in the Hebrew or Christian scriptures – which most Christians refer to as the Old Testament and New Testament – that explicitly says suicide is wrong. The biblical sources tell of seven people who had a hand in their own deaths. Here are their stories.

(1) The most recent biblical story of suicide is in the New Testament book of Matthew. One of Jesus’ original twelve disciples, Judas identified Jesus for the Jewish authorities with a kiss on the cheek in the Garden of Gethsemane, which ultimately led to Jesus’ crucifixion. Upon learning that Jesus was sentenced to a criminal’s death, Judas hanged himself.

(2) The first suicide reference in the Old Testament is Abimelech, son of Gideon. As recorded in the book of Judges, Gideon was the fifth in a series of fifteen rulers of the nation of Israel before it joined with the southern kingdom of Judah as a united monarchy. Israel had no king during that time, so the people elected a series of “judges” to lead them. Gideon and Abimelech consecutively ruled from the Canaanite city of Shechem, north of Jerusalem. Gideon had many wives and at least one concubine slave, who was Abimelech’s mother. Abimelech secured the throne by killing all but one of his 71 brothers and half-brothers. After three years of Abimelech’s tyrannical rule, many of his subjects revolted in a civil war. In the final battle, the leaders of the city were in a tower, which Abimelech surrounded with the intention of burning it down. However, a woman in the tower heroically dropped a millstone on him, cracking his skull. Nearing death, he asked his armor bearer to kill him to avoid the disgrace of being killed by a woman.

(3) Next we have the legendary Samson. Thirteenth in the line of fifteen ruling judges, Samson was also a Nazirite, which meant he took a vow to serve God and never cut his hair, drink wine, or touch a corpse. He spent twenty years rescuing his people from oppression by Philistine occupiers of Israel. Samson had tremendous strength, which made it impossible for the Philistines to capture him. Samson’s wife, Delilah, came from a Philistine family and betrayed him by telling the Philistine rulers that the source of his strength was his hair. They cut his hair while he slept, most likely with help from Delilah. After subduing and binding the weakened Samson, they gouged out his eyes and imprisoned him as a reminder to his people of the cost of disobedience. Samson’s captors later summoned him to the temple for their amusement. He asked to be led to one of the pillars that held up the building so that he could lean against it and rest. By this time, his hair had grown long enough for him to regain enough strength to push the pillars over, bringing the building down upon thousands of Philistines as well as himself. Samson was said to have killed more Philistines in his final act than in the twenty years he led his people.

(4 and 5) The first leader of the united monarchy of Israel and Judah was Saul, the predecessor of David, who was succeeded by Solomon. King Saul was seriously wounded in battle, and to avoid being captured he asked his armor bearer to kill him. The armor bearer refused, and Saul then fell on his own sword. The armor bearer then did the same in order to die with his king.

(6) King David’s son, Absalom, had his eyes on his father’s throne. Absalom’s counselor, Ahithophel, offered advice for how to kill David and take over the kingdom. When Absalom ignored the advice, Ahithophel hanged himself.

(7) After the reign of Solomon, the united monarchy once again split into the separate kingdoms of Judah and Israel. The fifth king of the new Israel was Zimri, who had murdered his predecessor, Elah. Zimri’s rule lasted only seven days before the army elected a rival, Omri, who then led the army in a siege of the capital, Tirzah. In a final act of defiance, Zimri set fire to the palace, killing himself.

If you research the above stories, you will find nothing in any of the scripture verses that clearly states the characters or their actions were evil or wrong. Each incident is merely reported as a historical event. There is no mention of these people interfering with God’s will or violating God’s commandment – common arguments against the right to die.

Speaking of commandments, one of the most common religious objections to suicide or assisted suicide is that it violates the sixth of the Ten Commandments given to Moses. Many people incorrectly think the sixth commandment is, “Thou shall not kill.” That’s actually a bad translation that first appeared in the version of the Bible commissioned in 1601 by James I of England – the famous King James Bible, which was arguably the most widely English translation of the Bible in the world until the late 20th century.

In the original Hebrew, the sixth commandment is, “Thou shall not murder,” and the difference is important because murder is specifically defined in Hebrew as “the taking of another’s life with malice.”

Let’s break that down. First of all, suicide is not the taking of another’s life, so right off the bat it has nothing to do with the sixth commandment.

What about helping someone who wishes to die by suicide? Well, “taking” in Hebrew is an act of aggression that is understood to be against the other person’s will. However, if I “give” you something voluntarily, you cannot “take it,” you can only receive it. English and other modern languages blur the lines between taking and receiving (as in the mutually beneficial notion of “give and take”), but ancient Hebrew does not.

As regular readers of this blog may recall from my earlier posts, I have worked as a hospital and hospice chaplain. I have been present when family members agreed to turn off the life support machines. I have heard many stories of family members who watched their loved ones suffer and later wished they could have done something to ease the suffering, even it that meant accelerating the process. I have talked with patients and family members about medical aid in dying where it’s legal, and about other options where it’s not. Those conversations are full of emotion, but that emotion is never malice. The predominant emotion is always love.

Suicide does not violate the sixth commandment because it is not the taking of another’s life. Likewise, assisted suicide does not qualify because it involves neither “taking” nor malice. There is nothing inherently wrong, evil, or immoral about either act, at least not according to the Hebrew or Christian scriptures. Anyone who says it interferes with the will of God does not understand the historical context of the culture that created the Ten Commandments.

If suicide is not expressly condemned or forbidden in the Bible, one might wonder why church leaders continually preach against it. The answer is simple – fear. Churches need the people to live in fear, lest they realize that churches are not necessary. More on that in a future blog post.