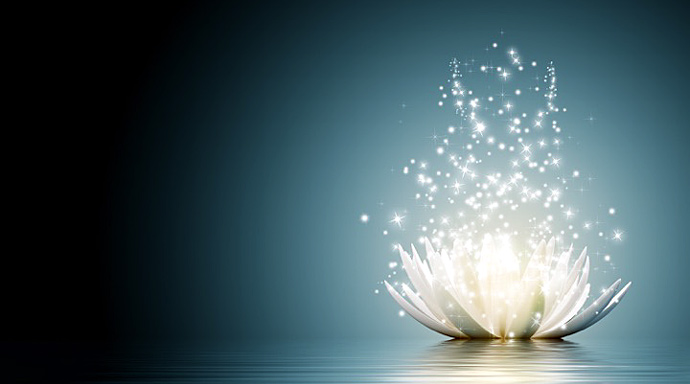 When the Tibetan Buddhists first brought their teachings to the west in the 1950s, the word "karma" came along with them, and within two decades the word became part of American pop culture. You could see it everywhere from bumper stickers ("my karma ran over your dogma") to department stores ("shoplifting is bad karma").

Buddhist teachings arrived in the west as a direct result of the Chinese invasion of Tibet, when monasteries were burned and monks were forced into exile. This event was in itself a magnificent act of karma, because as the monks traveled through the world, their teachings eventually landed on the shores of Europe and America, and brought waves of new spiritual understanding to western minds. This is an excellent example of how tragedy fuels the growth of the whole. There was a growth plan for the monks as well as the westerners,  because the monks, after centuries of seclusion, needed to have a uniquely human experience (war, invasion, exile) in order to truly practice compassion by releasing judgment against their oppressors. Before they came into the world to share their sacred teachings, they had to experience their own humanity so  they could understand the human condition.

But we westerners could not wrap our minds around the concept of  karma. How could we? Our thinking is so locked into biblical notions of judgment and punishment that we instinctively apply those notions to the concept of karma. We westernize it to fit our values, just as we westernize  reincarnation. We turn those ideas into systems of reward and punishment ruled by a judgmental entity, when in fact karma contains no judgment at all. Remember what Matthew said in Chapter Two about the warrior who kills an enemy and in another lifetime the two willingly switch places to allow both an opportunity to achieve balance? Buddhists understand balance. But westerners think in terms of payback. There's a big difference.

There is no payback because there is no payer or payee. Karma is simply the law of cause and effect, and like God, it does not judge us. It simply refers to the effect of every action on every other action. The only karma involved in shoplifting is that you'll either get a nice new sweater for free or you'll go to jail. Do you have to pay back the universe for the stolen sweater in a future incarnation? No. Will you go to jail for stealing the sweater? Maybe. Going to jail for breaking a law is justice, but karma isn't about justice. It's about balance.  If you steal a sweater because you're homeless and cold and need it to survive, you won't have to reincarnate as a thief who gets his hand cut off for stealing. But if you've made a career of stealing from others, then your soul will choose to experience the other side of those events in order to get a well-rounded, balanced human experience.

Balancing is a choice. A soul can choose to balance the karma of a lifetime as a criminal by designing an incarnation in which he will be the victim of similar crimes. But it's a choice made by the soul for growth, not a punishment imposed on us by a higher power. We are the higher power. The only one judging us is US. There IS nobody else.

We can also choose not to balance our karma, at least not right away. Hitler may return to earth as a benevolent, compassionate man with a comfortable life, and he may choose that for a thousand lifetimes rather than choose a prison camp experience to balance the energy. But as his soul evolves and he seeks to work with those energies, he will eventually move toward balancing his experience. This is true for everybody. If you signed up for a particular curriculum, perhaps to work on being a healer, you will eventually design a course of study that includes all the various aspects of the healer energy -- including the experience of illness, disability or discord.

There are millions of scenarios that can illustrate how karma is created and balanced. For example, if your friend is killed in a gang shooting you might respond by retaliating and shooting a rival gang member, which brings yet another soul group -- and all its branches -- into the story. Or you might respond by becoming a social worker who influences kids not to join gangs. Or you might spiral into drug use, depression or suicide, or you might run for office on a gun control platform and become the next mayor of your city.

Karma refers to the kaleidoscope effect of all experience, where each action by one of us will affect the rest of us. This doesn't mean that the gang member who did the shooting has to get shot by someone else to even the score, or that he was murdered by someone in a past life and is now paying it back in this one. It's never about payback. It's about creating actions that fulfill a growth request made by the souls involved.

At the writing of this book in Spring 2009, the economy of the United States was in shambles. Millions of people -- myself included -- lost their incomes and had their houses foreclosed while the corruption in corporate America was exposed for all to see. While I struggled with my financial losses, I also recognized that this soul group experience was an opportunity for mass transformation. The economic crash affected every person in exactly the area where they needed the most growth. For me it was about moving from working as an hourly marketing/copywriting contractor to focusing exclusively on my true work as an author and spiritual teacher. Of the millions who lost their jobs, some resigned themselves to blame and bitterness while others saw it as a chance to pursue their entrepreneurial dreams, spend more time with their families or change their shopping habits. This is group karma at its finest, rippling through the entire world in search of large-scale transformation and an elevated perspective. During this time in America, military enlistment went up and president Obama worked to end the war in Iraq. In my fantasy, millions of educated, skilled workers would join the military because there were no jobs anywhere else, and as a result, without a war burning through billions of dollars each day, the military would be transformed into an organization focused on humanitarian service.

OK, that may be a little far-fetched. But the point is that all souls work together, whether they know it or not. And our souls ultimately win the battle with our egos, whether we like it or not. Our egos hate it when we lose our jobs, but our souls know that something better waits around the corner. The more we become aware of how this works, the faster the growth occurs in our individual  lives and in our soul groups.

While living in the density of the earth plane it's difficult to recognize ourselves as Divine beings. Many teachers have come to earth to remind us what we are and where we come from,  but they're usually laughed at, ignored or murdered. Jesus is a perfect example. He was an unconditional volunteer too.